Phrasal Verbs are verbs which are made up of two words:

(A particle is either an adverb or preposition.)

Jane is putting on the light.
subject + verb + particle + object

(This means that Jane is “starting” the light by pressing the button.)

It is also possible to have a different order of words as follows:

Jane is putting the light on.
subject + verb + object + particle

We say that “put on” is a separable phrasal verb because it is possible to separate the particle from the verb (with the object in the middle).

Mark is a good friend. I know that I can count on him.

Mark is a good friend. I know that I can count him on.

If we can count on someone, it means that we can depend on them. We can rely on them.

Phrasal verbs are very common in English, particularly in informal situations. That is why they are so important.

In the rest of this lesson, you will learn several common phrasal verbs with put:

=the action of placing an item of clothing on the body. To get dressed.

put on (light or device)

put on a light
put a light on

put on a device
put a device on

put on weight
put weight on

Jane put on weight after her divorce.

put off an event

put off an event
put an event off

=to organise an event for a later date or time
=to postpone an event.

Jane is ill so we have put off her birthday party until next week.

We’re not ready. Let’s put the wedding off until July.

put out a fire

put out a fire
put a fire out

= to stop a fire
= to extinguish a fire 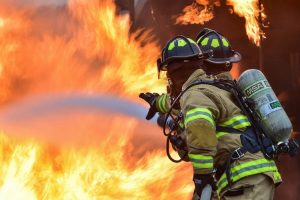 The firefighters are putting out the fire.

The firefighters are putting the fire out.

put up someone
put someone up

= to allow someone to stay in your home. To accommodate someone.

Mark: “I’m coming to London next week. Could you put me up for a few days?”
David: “Yes of course.”

Mark hates his job but he puts up with it.

Jane’s brother isn’t very kind but she puts up with him.

Notice that this phrasal verb has 2 particles. This is always non-separable.