Slang is often used in spoken English, but not in written English. Slang is not “good English” but it is very common. If you are an English student, I do not advise you to use slang. But it is important for you to understand it!

In this lesson, you will learn several very common slang words and expressions.

Meaning:
“bugger all” is slang for “nothing.”

Mark: What did you do last night?
Jane: Bugger all !

Examples:
Mark: My computer isn’t working. Can you help?
David: No, sorry, I know bugger all about computers.

Jane: Does Mark help you with the housework?
Sarah: No, he does bugger all !

Meaning: Very happy or very pleased about something. (adjective to describe a person)

Jane: Mark bought me a ring. I’m so chuffed!

David: Did Jane like the ring?
Mark: Yes, she was chuffed.

Mark: I spent the day with my dad yesterday.
Jane: I bet he was pleased.
Mark: Yes, he was chuffed.

Meaning:
An error or mistake (noun). Something that is done wrong or badly. If you make a cock-up of something, you ruin it by doing something wrong.

Jane: Why was it so late?
Mark: They made a cock-up of the order.

to cock something up – Phrasal verb

Meaning: To do something badly. To make a mistake with something.

Form: to cock something up

Example:
Mark: They cocked the order up.

We can also change the order of the words:

Form: to cock up something

Example:
Mark: They cocked up the order.

Meaning:
“a doddle” means “easy.” It is an adjective to describe a situation or thing.

Jane: How was the exam?
Mark: It was a doddle.

Sarah: I want to bake a cake but the recipe looks difficult.
Jane: It’s not difficult. It’s a doddle.

Meaning: dishonest or not to be trusted. (Adjective to describe a thing or person.)

Examples:
Jane: What do you think about John? I think he’s a bit weird.
Sarah: Yes, he’s dodgy.

Mark: That company is dodgy. Don’t invest in it.
David: Thanks for the advice.

Meaning: Likely to fail or cause problems. (Adjective to describe a thing.)

Examples:
Jane: Be careful with the phone. The screen is very dodgy.

Mark: We should cancel our trip to New York.
Jane: Why?
Mark: The weather is too dodgy.

Examples:
Mark: I flogged my old phone and bought a new one.

Mark: Where is your TV?
David: I flogged it.

Meaning:
A “fluke” is something good that happens due to luck or chance. (noun)

Examples:
David: I played poker for the first time yesterday and I won!
Jane: Wow, that was a fluke!

Mark: I passed my final exams!
Jane: Congratulations. That’s incredible because you hadn’t studied for them.
Mark: I know. It was a fluke.

Example: There are two bottles of champagne on the table.

Slang meaning:
The slang meaning of “bottle” is “courage”. (uncountable noun)
Someone with a lot of bottle is courageous and brave.

Example:
Mark: I’ve decided to quit school and join the army.
David: Wow really? You’ve got a lot of bottle!

We often use “bottle” with the following expression:

Meaning: To lose confidence and fail to do something.

Example:
Mark: I’ve changed my mind. I’m not going to joing the army. I’m going to stay at school.
David: It sounds like you’ve lost your bottle.

“chat someone up” is a phrasal verb.

Meaning:
To talk to somebody in a way that shows that you are physically attracted to them. People chat people up as a method of seduction, for example.

Form: chat someone up

John: What is Mark doing?
David: He’s chatting Jane up.

Mark: I really like Jane and I think she likes me.
David: Go and chat her up!

Meaning:
Slightly rude or not showing respect. (Adjective to describe a person.)

We say “cheers” (exclamation) while having a drink with someone. It’s a friendly gesture. We often touch glasses when we say “cheers”. This meaning is valid in both British and American English. 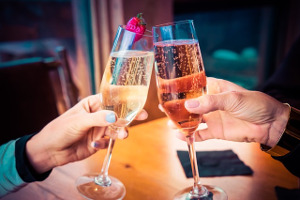 “cheers” also means “thank you” (exclamation). This is British English only.

Sarah: It’s raining. Can I borrow your umbrella?
Jane: Of course.
Sarah: Cheers! I’ll give it back to you tomorrow.

David: I bought you a sandwich.
Mark: Cheers mate!

(“mate” is another British slang word. It means “friend.”)

“cheers” also means “good-bye” (exclamation). This is British English only.

Meaning: “daft” means stupid or silly. (Adjective to describe a person or thing.)

Examples:
Jane: Mark wants to buy a boat.
Sarah: But you don’t live near the sea.
Jane: I know. It’s a daft idea!

John: I love pigs. They are so cute.
David: You should buy one.
John: Don’t be daft! I don’t have time to take care of a pig.

Mark: Who is that?
David: That’s Simon. He’s the new salesman.
Mark: What’s he like?
David: He is friendly but he is a bit dim.

Meaning: A very long time.
We often say “donkey’s years” to describe the long period of time during which we have not seen somebody. We often use it with a verb in the negative form of the present perfect tense.

Mark: Hi Clare. Do you remember me? It’s Mark!
Clare: Hi Mark, how are you? I haven’t seen you for donkey’s years!

give someone a bell

Meaning: To call someone (by telephone).

Mark: I’m going to London tomorrow for a week.
David: Have a good trip!
Mark: Thanks. I’ll give you a bell when I get back.

Jane: Hi Sarah, can I speak to you about something?
Sarah: I’m sorry, I don’t have time now. Give me a bell later.
Jane: Ok, sure!

Meaning: “gob” is slang for “mouth”. (noun).
Be careful, this is quite a vulgar and rude word.

Jane: What do you think of Clare?
Sarah: I don’t like her. She’s got a big gob!

(When we say that someone has a big gob, we are usually talking figuratively and not literally. It means that the person talks too much and perhaps also too loudly! It is an insult.)

We often use “gob” in the following expression:

Meaning: shut your mouth. We use this to tell someone to be quiet after they say something you don’t like. This is very aggressive and rude language so be careful!

Example:
Phil: You won’t pass the exam. You’re too stupid.
Paul: Shut your gob! I didn’t ask for your opinion.

Meaning:
“grub” is slang for “food”. We use it as an uncountable noun. This is particularly common in the south of England.

Examples:
Jane: I’m starving.
Mark: Me too. Let’s have some grub.

Clare: Did David pass the exam?
Sarah: No, he failed. He’s gutted.

Mark: How was the job interview?
Jane: Terrible. I didn’t get the job.
Mark: Oh I’m sorry. Are you ok?
Jane: No, I’m gutted.

Meaning: Have a short sleep. To sleep for a short period of time. To have a nap.

Examples:
David: Hi Mark, how are you?
Mark: I’m knackered! I got up at 5 o’clock this morning.

Jane: Hi Sarah, do you want to go to the cinema tonight?
Sarah: No, sorry, I’m knackered!

Meaning:
“nick” something is slang for steal something. It’s a transitive verb.

Jane: What is that man doing?
Sarah: He is nicking her phone!

John: David, have you nicked my pen?
David: No, it wasn’t me!

not my cup of tea

Jane: Do you like my new hat?
Sarah: It’s nice but it’s not my cup of tea.

Mark: Do you like that car?
David: It’s not my cup of tea.

to be on about something

Meaning:
To be talking about something.

We often use it in the question form:  What are you on about?

Meaning:
“What are you talking about?”
We ask someone this question when we don’t understand or agree with what someone is saying.
It is an informal and aggressive question. It’s quite rude.

Manager: Why are you late?
David: I’m not late!
Manager: What are you on about? You’re 30 minutes late!

Situation: Jane and Mark are in a maths class. Mr Jones is the maths teacher. Jane doesn’t understand the class. After the class, Jane talks to Mark:

Jane: What was he on about? (past tense)
Mark: I don’t know. It was complicated.

a piece of cake

Meaning:
“a piece of cake” is an expression. It means “easy”. It is an adjective.

Jane: How was your exam?
Mark: It was a piece of cake!

Meaning:
“pissed” is slang for “drunk” (having consumed too much alcohol). It is used as an adjective to describe a person.
Be careful – “pissed” is considered a swear word in English. It is therefore quite vulgar language.

David: Let’s go to the pub and get pissed!

Meaning:
“plastered” is also slang for “drunk”. It is used as an adjective to describe a person.
“plastered” is not a swear word. It is therefore more polite slang than “pissed.”

Example:
David had had too much to drink. He was plastered.

Meaning:
“pissed off” is used as an adjective to describe a person. It means “annoyed” or “angry”.

Clare: I failed the exam. I’m pissed off.

We often use the following structure:

to be pissed off at someone

Meaning:
To be annoyed or angry at someone.

Jane: I’m pissed off at you.
Sarah: Why? What have I done?
Jane: You lied to me!

to piss someone off

Meaning:
This is a phrasal verb. It means “to annoy someone”.

Form:
piss someone off

Example:
Sarah: You’re pissing me off.  (Meaning: You’re annoying me!)

Meaning:
“prat” is a noun referring to a person. “prat” is slang for “a stupid person”.

David: Why does John wear sunglasses indoors?
Mark: Because he’s a prat!

Often we call someone a “prat” as a joke to someone we like. We are teasing them but we are not being serious.

Example:
Jane: Hi Sarah, would you like to come to my party?
Sarah: Are you sure? I didn’t realise you like me!
Jane: Don’t be a prat! Of course I like you!

Meaning:
“quid” is a noun.
“quid” is slang for “pound” (British currency)

The form of “quid” is always singular. It is never plural. The meaning can be singular or plural.

Jane: How much is the train ticket?
Sarah: Sixteen quid.

John: David, can I borrow five quid?
David: Yeah sure!

This lesson is also available in a series of four videos in a playlist. This is the first video in the playlist: