We can divide English verbs into two broad categories:

Let’s look at the differences.

A sentence with an intransitive verb only has a subject and a verb. The subject is the person (or thing) that is doing the action. There is no direct object to the verb.

In this sentence, we only have a subject (Mark) and the verb (sleep). Notice that there is no direct object to the verb. “sleep” isn’t being done to anything or to anyone.

An intransitive verb simply describes the action being done by the subject of the sentence. Intransitive verbs often describe physical behaviour or movement.

Example sentences:
The man has died.
Jane is laughing.
I would like to stay.

Examples:
The door opened slowly.
Sarah is walking to the office.

A sentence with a transitive verb has a subject, a verb and a direct object.

A direct object is the person (or thing) that is acted upon by the subject. 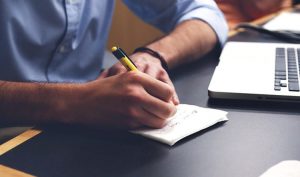 Mark is writing a letter.

More examples:
Mark is playing football.
I have made a sandwich.
Jane is drinking a cup of coffee.

How to find a direct object

Here is the process:

David is eating a sandwich.

1) David is eating what or whom?
2a) “sandwich” is the direct object. Therefore “eating” is transitive.

1) Mark is sleeping what or whom?
2b) No answer. There is no direct object. Therefore “sleeping” is intransitive.

Example:
Jane is giving me an apple.

Some verbs can be transitive or intransitive with the same general meaning of the verb.

The door opened. (intransitive)
I opened the door. (transitive)

Some verbs can be transitive or intransitive with a different meaning:

Mark is sitting on a chair. (intransitive with a prepositional phrase)
Meaning: This sentence is describing Mark’s physical position.

Mark is sitting an exam. (transitive)
Meaning: “sit an exam” as a transitive verb means “take an exam”. This meaning is very different to the intransitive meaning of “sit”.

How to know if a verb is transitive or intransitive?

If a verb can be used as both transitive and intransitive with different meanings, it will have separate entries in the dictionary with the different definitions and examples.

Let’s look in the dictionary. We will find these 2 entries:

verb [ I ] = to move quickly, faster than walking

This is the intransitive use and meaning. Therefore we know that we do NOT use a direct object for this meaning.
Example: “Mark is running.”

This is the transitive use and meaning. Therefore we know that we MUST use a direct object for this meaning.
Example: Mark runs a hotel.

Common English mistakes – They’re, there and their
ADVICE or ADVISE – The differences
When to use capital letters in English
Expressions and phrases with CARE
IELTS online course and writing corrections